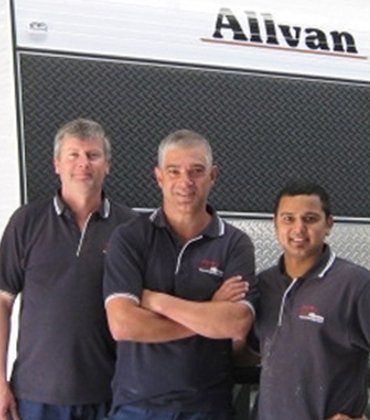 Allvans Caravan Repair is a specialised accident repair, servicing and caravan modification centre situated in the heart of Casey. Local business partners Nilton Dantas and David Debomford founded the business in 2007 and have experienced strong growth as they continue to deliver a customised service to a growing numbers of caravan owners. Together, Nilton and David bring over 40 years of caravan repairs and manufacturing experience to the business and have a growing workforce of repairers that have been consistently trained to the highest standards of this industry.

Allvans is recognised as a market leader in the accident repair sector amongst all major insurers, as they provide a seamless hassle free service to their customers. In building strong relationships with these organisations Allvans can manage the entire claim for a customer with as little as a claim number, to deliver guaranteed workmanship unlike any other accident repairer, check out Our Services/ Accident Repair for further information.

Allvans build lifetime relationships, with their customers, and this has been the foundation of their growth as a business. Allvans have now seen clients in their 3rd generation of caravan’s and can tailor their service to consistently meet their caravan modification needs. As this industry grows beyond the ‘grey nomad’ Allvans are able to consistently support the needs of clients that are Weekend and Annual Caravaners.

Our new ALLVANS 3 caravan / build from the ground to suit our personal requirements. With 38 years caravanning experience and Jim as a past President of the RACV Caravan Club, we are delighted to promote ALLVANS as an “EXCELLENT OPTION”. The caravan was completed for delivery in may 2012. It is

Our thanks go to Nilton, David and Garrick at Allvans for the fantastic job they did building our new van “ALLVANS 2″. The whole experience went smoothly even when we were changing things as we went along, Nilton kept us fully informed and included us in the process right throughout the job, whi

After our old and tired c’van was in need of repairs, we visited “Allvans” premises, saw their workmanship, and decided forget the repairs, let’s get a new caravan build. At the time they, Nilton and his team, were building allvan No 4, I was impressed with the way they implemented the lates

Allvans 1 began when Nilton, David and I discussed the design for a great caravan. Using the 40+ years of experience repairing and servicing caravans they both had seen all the mistakes and bad designs. Allvans 1 design had bed at front with a sloping roof and a long wheel base for a great weight

After looking at different caravans on the road, in sales yards & magazines we were very fortunate to meet John & Carol with ALLVANS 2 at 80 Mile Beach, WA. We both fell in love with it, ALLVANS 2 still looked brand new even though it was 3 years old & traveled 11 months a […]

After spending several years thoroughly researching off road vans an ex work colleague suggested we inquire about having an ALLVANS Caravan built. My immediate impression on visiting the company, for the first time, was the high standard of their workmanship and their use of quality materials, on re […]

Charles & Marie
For that reason, the particular lines are furred any time addressing the issue associated with richard mille replica replica view motion Japanese vs Exercise. Similar to Exercise timepieces with Japoneses movements possess physical movements, automatic motions or even quartz actions manufactured in The japanese.
Designer watches are inclined toward creating a greater track record of obtaining Swiss movements. But the Japan movements continue to improve in top quality. And also have proven themselves because rivals in order to Swiss actions. Nevertheless, consider that richard mille replica several movements are created in China. And that's simply to product the actual Europe or Japoneses motion. After that any sense associated with rivaling can be removed. The notion of reproduction watch activity Japanese vs Switzerland becomes more semantic when compared with syntactic.
In certain lighting circumstances and also as well as fake watches distinct angles, your dark-colored porcelain frame might even appear to be off white.